Last week an acquaintance said something that got me thinking. He implied it would be creepy if he joined a gaming group with college aged gamers. I’m assuming this is because he’s his early 30s or thereabouts and perceives himself as much too old to be hanging out with such young whippersnappers in their 20s.

Most of the time when I hear people talking about “creepy” they’re talking about someone else, so it was refreshing to hear someone self-reflecting that their own actions might be “creepy.” Even so, I think there’s a larger social issue to be reflected on here – why is it okay to label some people or some actions as “creepy” in the first place. Sure, there are some people and some actions that are genuinely creepy, but I honestly think that the majority of people labeled as creepy are simply misunderstood and are frequently shy or socially awkward. While a few may be serial killers, rapists, or white slave traders, I’d hazard to guess that the majority are not. Of the remaining population, there are admittedly those who are either deliberately or unknowingly inappropriate, overly assertive, or just plain too honest.

So what’s creepy about playing Magic the Gathering with people outside your age cohort? Perhaps I don’t see the problem because I’m one of those creepy people with friends of all ages and backgrounds.

Introverts are creepy. Librarians are creepy. Photographers are creepy. Pagans are creepy. Christians are creepy. Nerds and geeks are creepy. People with disabilities are creepy. Old (sometimes just older) people are creepy. That guy over there just asked me out – boy is he creepy! Anyone – scratch that – everyone looking for a date online is creepy – obviously there’s something wrong with them or they’d have better luck meeting people offline. Leather folks, drag queens and the transgendered – creeeepy. Men who are upfront and honest about their feelings or intentions are creepy – what?

Basically anyone outside of one’s social “in group” can be creepy, especially if they fall outside of social ideals, expectations, or behaviors in some way. Their behavior doesn’t even need to be threatening – just different. Creepy is based on a subjective feeling inside the person who gets creeped out, and that’s one of the biggest problems with labeling someone as creepy. It’s about someone’s subjective feelings, not necessarily an inappropriate, predatory, or aggressive action. Actions can be proven; feelings are individual and can be biased. The subjective feeling could come about just as much by one’s own insecurities, personal issues, background, or belief system as the actions of another person. Sigmund Freud even suggested that it’s common for people to transfer feelings, experiences, and mistrust from one person to another who reminds us of that person. Perhaps the creepy person reminds us of someone else we had a bad experience with. The other big problem with labeling is that the person being labeled has to live with that label and the negative reputation associated with being called “creepy”. That’s a hard one to live down because the more one denies it the creepier one appears.

There’s usually some element of sexuality involved with allegations of “creepiness.” The implication is that the person is a sexual predator or that the person deliberately and malevolently says or does something sexually inappropriate on a regular basis. While complaints of lewd comments or inappropriate touching are legitimately “creepy”, other complaints and justifications for labeling someone as “creepy” aren’t necessarily justified – someone unattractive, socially awkward, or older asked us out or maybe that guy was overly friendly even if he said or did nothing inappropriate. Sometimes the only difference between whether someone is labeled creepy or not is how attractive and self-confident they are. Attractive and self-confident people can be creeps or just plain jerks, but usually they’re innocent until proven guilty whereas the opposite is often the case for unattractive and socially awkward people.

In our cynical, fearful society there’s always something so fear. Perhaps we’re too afraid. We’ve been given all these messages to fear strangers. We hear all these things in the news about Craigslist killers, abductions (not the alien kind), pedophile priests, and date rape. Sure these bad people exist in society, and I’m not suggesting people shouldn’t be smart about these things, but we should save our labels for those people who have truly earned the label. Labeling others willy nilly only serves to keep us isolated from people with different ideas and takes on life or in different age groups or social groups. This labeling also perpetuates the feelings of isolation and dejectedness in those being labeled unjustifiably. Sometimes a stranger is just a friend you haven’t met yet, or so I’ve heard.

Many ancient cultures valued the concepts of hospitality and civility, as well as the idea that things aren’t always what they seem – from frog princes to gods dressed as beggars. In the myths and folktales of such cultures, those weird, crazy, poor, or creepy strangers one met might just be a god, spirit, or king in disguise. They might be testing you to see how you treat others. If you ignore them or treat them badly, you might be punished. If you treat them well and look beyond appearances you might be rewarded. Sometimes the creepy stranger in these tales really did have bad intentions, which is why you have to go into each situation with an open and objective mind. Hope for the best, but prepare for the worst. And don’t label unless it’s truly justified.

The idea of a god or spirit in disguise might seem too farfetched for many in today’s world. We’re far more likely to believe the worst possible scenario or to fear the worst in people. The media sensationalizes the worst. As long as we’re dealing with “what ifs”, what if that “creepy” old man you think is flirting with you or that beggar on the street is a rich benefactor looking for someone to invest in or to leave his fortune to? What if that “creepy” person who asks you to model is a legitimate and professional talent scout or photographer willing to pay you for your look or talent? What if that “creepy” woman in the grocery store is actually an actress from a hidden camera show and how you treat her will show a television audience your true merits as a human being? What if that “creepy” manager at work wants to mentor you and help your career? What if the “creepy” person who strikes up a conversation with you at the bar has lots in common with you and has the potential to become a new best friend? All these things can and do happen – possibly just as often as the bad things. I don’t know the actual statistics. It seems short sighted and shallow to jump to the worst possible conclusions and to label people without a fact-based reason.

We’re also fearful of sexuality in our culture and that plays into the “creepy.” For a long time, gay men were viewed as creepy predators, the religious and political right still hold this view. People with fetishes are considered creepy. Women and men who date younger (albeit legal aged) individuals might  be considered creepy. Even drag queens and the transgendered are labeled as creepy, rather than valued for their uniqueness and difference.

The term “creepy” has begun to be used toward men in the same way “slut” has been used with women. It’s a form of social control to control sexuality and sexual norms. “Slut” has been used as a derogatory term for women who don’t save their virginity for marriage or who enjoy exploring their sexuality. Rather than allowing women to feel free and empowered in their sexuality, the term “slut” punishes these women and keeps them in their place because of the damage the label can do to their reputation. “Creepy” is often used nonchalantly by the “pretty” socially privileged people to keep the average, “ugly”, older, or socially awkward people in their place – basically at arm’s length or even further.

“Creepy” has also been used by women to shame men who don’t buy into society’s ideas of monogamous vanilla sexuality and marriage. Sure there are “creeps” out there who lie and cheat and only think of their needs. There are other men who are honest and up front about their affectional and sexual intentions, as well as their unconventional ideas about sexuality. This includes men who are into a fetish scene, who remain bachelor’s (whether sexually active or happily asexual), those who follow polyamorous lifestyles, and even men who enjoy pornography. Many of these men might come across as “creepy” to someone with a puritanical view of sexuality, but they certainly aren’t creeps.

In our sex negative society, anything outside of mainstream gender and sex roles might be considered creepy. In a sex positive society, they would be seen as different, but equally acceptable alternatives for people to choose from.

I personally believe the term “creepy” should be saved for Halloween and horror movies, not for people – at least not unless they’ve actually done something to deserve the label.

I’m Mel Mystery. I’m not a creep, but I am creepy in a number of ways, but none of them particularly harmful or malevolent. Now get over it. 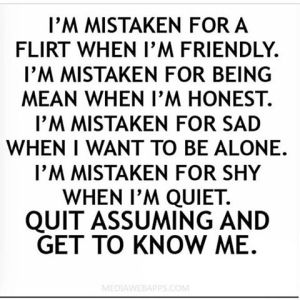